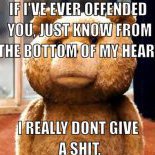 Rage Quitting while stealing your Killstreak

By Thunder, April 28 in General Discussion